Home Ghana News As they rush to save lives, health care workers are updating their own wills and funeral plans
Ghana News

As they rush to save lives, health care workers are updating their own wills and funeral plans 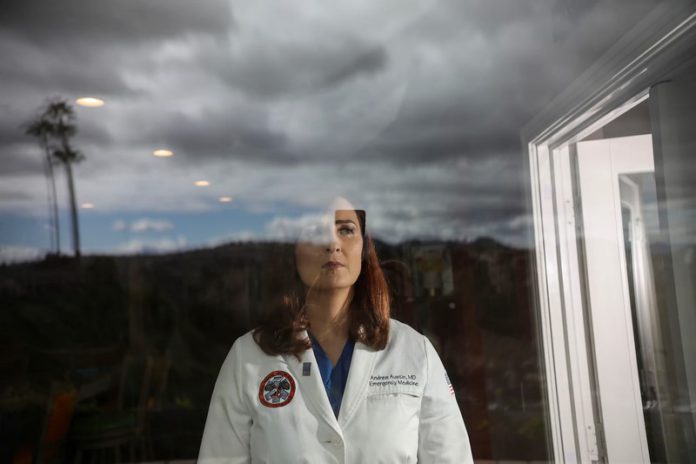 The first time Andrea Austin, 35, considered her own mortality, she was flying into Iraq aboard a C-130 military plane. Though the emergency medicine physician had set up a living will and power of attorney before her seven-month deployment with a shock and trauma team, entering a war zone crystallized the dangers of her job.

She wrote down which of her fellow doctors she would entrust with end-of-life care. She made clear her preference for cremation. And she compiled her funeral playlist, starting with Israel Kamakawiwoʻole’s “Somewhere Over the Rainbow.” Then she stored the details on Google Drive and shared the files with her husband and brother.

“My fear of dying is worse now than it was when I was in Iraq,” she said.

As millions of Americans stay home to limit their exposure to the virus, health care workers are on the front lines of a deadly outbreak that has yet to peak. Doctors and nurses around the world are posting photographs of their faces, bruised from grueling shifts in protective gear.

At the same time, physicians are increasingly coming to grips with the fact they could die, too. They are routinely exposed to harsher viral loads as the number of patients flooding emergency rooms and urgent care centers mounts by the hour. On Thursday, U.S. deaths from coronavirus topped 1,000 and confirmed cases surpassed 75,000.

That means health care workers, many in their 20s or 30s, are making arrangements to ease the burden on their loved ones. Every day, doctors accept the risks of treating people in need. But rarely has their entire profession been thrust into such a sweeping, indiscriminate crisis.

For Austin, this is not an abstract fear. Weeks ago, she saw photographs of Chinese health care workers dressed head-to-toe in protective suits as the outbreak began its catastrophic expansion. Then she learned of the deaths of Li Wenliang, the Wuhan ophthalmologist who tried to sound the alarm about the virus, and Peng Yinhua, the 29-year old doctor who put his wedding on hold to treat the sick.

“It was the age that really stood out to me,” Austin said.

Coronavirus adds peril to the already at-risk: ‘If I get this stuff, it’s going to kill me.’

In Italy, now the flash point of the pandemic, 39 health workers have died, according to the Italian news agency ANSA. Marcello Natali, a general practitioner in Codogno who railed against his government’s response and the dearth of protective gear, died this monthafter reportedly having to treat patients without gloves. A 34-year-old hospital nurse who had been working in the intensive care unit committed suicide after contracting the virus. She “had been living with heavy stress out of the fear of having infected others,” ANSA reported.

As U.S. states and hospitals scramble for meager supplies, many American companies — including Ford, 3M and General Electric — are teaming up to make ventilators and respirators. But that process could take months. The private sector’s voluntary efforts may only go so far without coordination from the federal government.

That leaves doctors to make grim calculations. Though estate planning is a basic tenet of financial planning, such deeply personal and difficult decisions have taken on a painful urgency, especially as doctors brace for a surge in cases in the coming weeks.

“We can read mapping,” said Michelle Au, an anesthesiologist at Emory Saint Joseph’s Hospital in Atlanta, who is also running for a seat in the Georgia State Senate. “People feel like they’re standing on a hill, and you see the tsunami coming in.”

With all non-emergency surgeries canceled, Au’s team has been redeployed to emergency care, which includes intubating patients who cannot breathe. The procedure is risky in that it can cause patients to cough, aerosolizing the virus as physicians hover overhead.

Au’s husband, Joseph Walrath, is a surgeon, doubling their household’s risk. They have taken basic precautions: Au has gradually moved into the basement. She showers and changes clothes before she leaves the hospital and repeats the cycle when she comes home.

But they still wrestle with what-ifs: Who would care for their 14-, 11- and 7-year-old children? Or be executor of their wills? Or be given power of attorney?

For years, Au and Walrath had three people lined up for each role. But some of those loved ones are now in their 70s and are themselves at heightened risk of infection. Another is also an anesthesiologist. On Sunday, Au called a longtime friend — a law professor — to ask if he would step in.

“It’s a difficult conversation with a high school friend,” Au said. “We needed someone, someone who is not in the line of fire.”

Au and Walrath have not talked about these contingencies with the younger children. But they sat down their teenage son and gave him limited access to some accounts and passwords.

“He’s 14, he’s a kid,” Au said. “You don’t want to put it on him, really. But he’s old enough that he could maybe facilitate something getting done.”

Jane van Dis, 51, is an obstetric hospitalist in Los Angeles and a practitioner at the Maven Clinic, a major telehealth provider for women. The single mother of 12-year-old twins said she finalized her will after her divorce six years ago.

But the pandemic has forced her to reckon with how quickly health care workers can become incapacitated and lose the ability to make basic decisions. Last week, she had a frank conversation with her sister and decided to organize her bank accounts, passwords, automated bills, disability insurance and life insurance for her sister’s records. She plans to ship it via FedEx.

“I realized how hard it would be for my sister to have to try to do a lot of detective work,” van Dis said. “I thought if I take some really preventive steps now, in the event the worse case scenario happened, she wouldn’t have to suffer through trying to figure my life out.”

Christine Sigal, 49, is an OB/GYN, and her husband is an ER doctor at a large trauma center in Reading, Pa. Every day, they read about doctors and nurses testing positive for covid-19, falling ill and even dying.

The couple tended to wills, power of attorney and life insurance policies once they had children, but they are now going back with updates. After the pandemic took hold, they reviewed their bank and retirement accounts, passwords and the college funds they had set up for their 20-year-old daughter and 17-year-old son. Then they spoke with relatives in New Jersey and Chicago to go through their arrangements.

Austin, the emergency room physician, had planned to be on vacation this week. Instead, she is resting at her San Diego home in preparation for what will soon be extra shifts, sleepless nights and, in all likelihood, a relentless caseload of coronavirus patients.

“I am not naive to the risks of being a physician,” Austin said. “I have spent more time thinking about my personal preparedness, but my devotion to my specialty and my patients is not impacted.”

So Austin made plans. If there is a slide show played at her funeral, she wants it set to Meghan Trainor’s “Badass Woman.” For the end of the ceremony, she chose Stevie Wonder’s “Ave Maria.”

Akufo-Addo’s address on progress of lockdown

Sister Derby’s message to Medikal on his birthday...

Nigerian actress under fire for Lagos party amid...